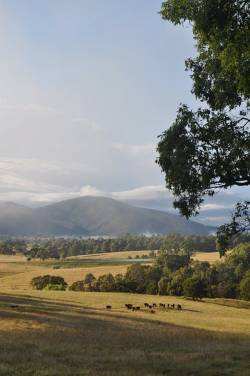 The fact that I am a potter is an integral part of who I am. As is the fact that I need nature around me to feel alive. Both are reflected in the work  that I make.

My pots are influenced by my rural life as well as a childhood travelling the world with my rather alternative family. They always had a great respect for the handmade which I took on. To use an item that has been formed by another's hand is a privilege and a delight.

Our farm is near Cobargo on the far south coast of NSW. This area is remote and wild and the land fertile and lush. Living here has made my work flourish. Its a very artistic and musical area, always so much going on and so much support for art.

We have also  built  the most fabulous studio which is pleasure to enter.

I am making more sculptures and colourful work, experimenting more... its a lot of fun.

Before we moved here in 2014, we lived in central west NSW also a beautiful part of the world.

I have CRAFTMARK ACCREDITATION awarded by the Crafts Council of Australia to craft workers who produce consistent high-quality work. 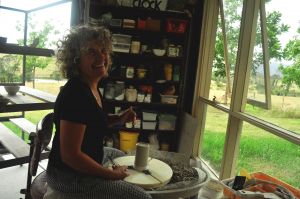 Many articles in national magazines and newspapers and Ceramics Monthly in the US.

Regular group exhibitions, including at Watsons Gallery in Canberra and as part of a national touring exhibition.

The most recent solo exhibitions have been I  at the Inner City Clayworkers in Glebe in September 2016 and  one at Blackwattle Gallery in Cobargo in October 2017.